English Eerie Second Edition: A Rural Horror Storytelling Game for 1-4 Players is a GM-less tabletop game of terrifying proportions, allowing you to weave your own haunted tales set in the dark English countryside.

There is blood in the roots of England. Forgotten, ancient things crawl beneath its surface, haunt its manor houses and creep within its woodland. Beyond the bucolic beauty of its rolling hills and quaint villages are sinister forces at work, and you're about to stumble headlong into them.

English Eerie uses the Eerie Engine system to help players, solo or a group, to step into the shoes of a protagonist from a classic horror tale, like those written by the likes of M.R James, Arthur Machen and Algernon Blackwood, as well as the folk horror tradition. Using the scenarios in the book you will uncover new disturbing clues, clash with other characters and succumb to the dread forces as you delve further into their mysteries. The system automatically ratchets up the tension as you go, with your protagonist becoming more helpless as the tale progresses.

As a solo game you are the protagonist, writing in your journal by candlelight over a series of evenings recounting the day's events just like in those great tales of terror. You create your protagonist using a series of desciptors and prompts, bringing these into play as the mystery unfolds.

As a group you tell the tale orally, all playing as a single protagonist. Turns pass around the circle as you describe the situation, react to cards pulled from the Story Deck and spend resources to determine the ending of the story. The book includes advice on safety mechanics - because your idea of horror might not be the same as everyone else.

To power the game you will use a Story Deck, which can be a regular deck of cards or the official English Eerie Story Deck. Each card is related to a scene, which is cross-referenced with the scenario to discover what new plot element unfolds. Everytime a Grey Lady is revealed the tension increases and decisions need to be made. The protagonist uses Spirit and Resolve resources to overcome obstacles and horrors in their way - but they must be spent wisely for the fate of your protagonist hangs in the balance.

English Eerie Second Edition is released under a creative commons sharealike license, meaning you can design and release your own hacks and scenarios.

English Eerie contains 10 scenarios spanning multiple centuries. From stories of fell beasts on the moor, a haunted inn, a futuristic biome, a dark god and more. There's plenty of content to keep yourself busy for many evenings.

What People are Saying about English Eerie

"Players will feel like morbidly curious observers of a campfire horror story as the tension slowly mounts over time." Dicebreaker

"You’ll find yourself quite satisfied with English Eerie if you enjoy writing based games, and if you want to spring for the second edition, especially if you think orating a spooky tale in a group sounds like a good idea, it won’t disappoint." Jon Spencer Reviews

" I like it, I like it a lot. Complete with a sinister set of scenarios, English Eerie is both a strange game, a curious way to spend a few evenings, and a great writing exercise." Karavansara

In order to download this game you must purchase it at or above the minimum price of $6 USD. You will get access to the following files:

Support this game at or above a special price point to receive something exclusive.

If you're a marginalised person or don't have the funds to afford a paid copy of the game, please take a community copy.

You said over two months ago that you would post the deck that isn't supposed to come with the game.  You still haven't done it.

Hi. I think that was a typo, but the deck wasn't supposed to come with the game. However I do want to upload it, I've just not got around to it yet. Apologies it wasn't back then, but please don't be rude.

I haven't been rude. Just stating facts that you  failed to do what you said you would do. I'm not worried about the game anymore. I just want others to know what happened and what they shouldn't expect

What are the exclusive contents for this version

Hey there - just bought the pdf. As times are crazy with the pandemic, I'm going to run this as a virtual gaming session for Halloween. I saw that you are (hopefully) going to upload the imagery for a printable deck. I would really appreciate this as I can then utilize the imagery for creation of a more atmospheric deck for online play.

Hey - this is now available

I bought this game and downloaded it. I would like the story deck that is supposed to be with the game. How do I get that? I know I can use the deck of cards but I would like to use the game cards

Hey, sorry for the delay. I'm going to put up a printable sheet for now as there was a print issue with the initial cards.

Do you know when that will be?

Hopefully this weekend all being well

IS there any locations  to  buy a physical copy, I'm so heart broken.

Such a beautiful game- well done!

This game looks really interesting! I bought it, and it looks good, but are the first two pages and last page supposed to be blank?

They are yes. It's just so it can be printed :)

And thank you so much! 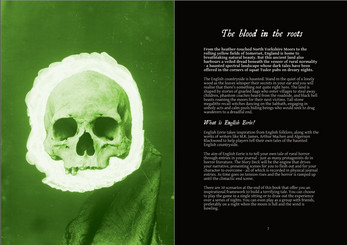 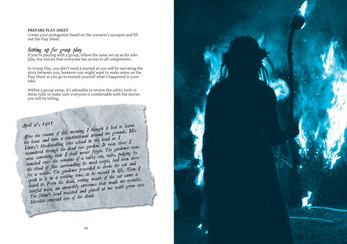 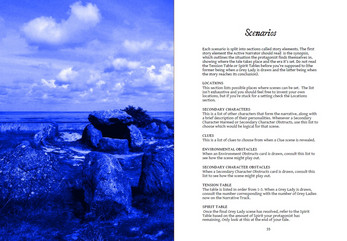